Street art during the anti-government protests in Lebanon 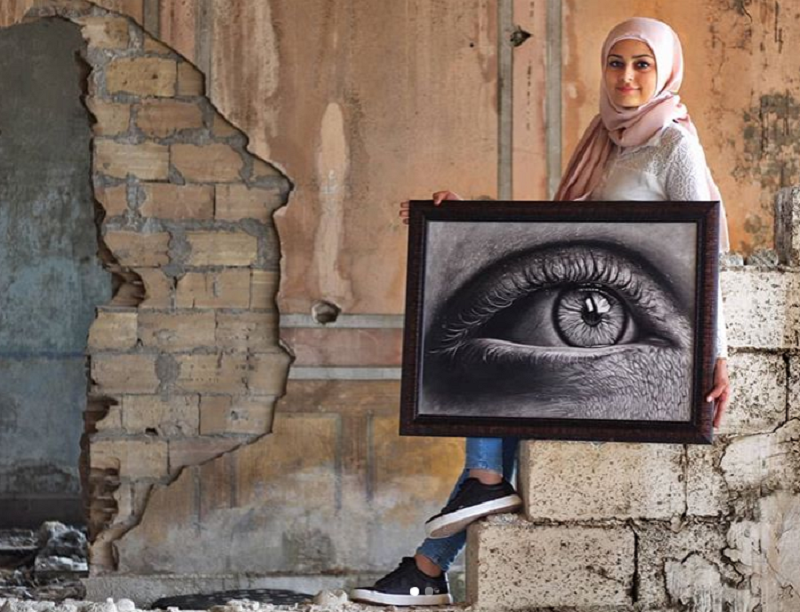 Batool Jacob. Photo taken with permission from her Instagram.

Since the demonstrations against the Lebanese government began on 17 October 2019, street art has increasingly become another form of protest. Artist and activist Batool Jacob who, together with a group of artists from Tripoli, took her artwork to the streets as urban art has spread across walls in unison with the voices protestings across cities.

Last October, when the Lebanese government wanted to implement a tax on the WhatsApp call service and other social media platforms, thousands of Lebanese people went out to protest in different cities. For them, this new measure disproportionately affected the poor majority. Although the government withdrew the measure, protests continued, denouncing political corruption, the sectarian system that establishes fixed quotas for seats based on religion, the economic crisis, as well as defending the rights of women and minority groups, including Syrians. The government fell on 29 October, but when a new government was formed in January 2020, it was received with fresh protests. Since the protests began, the government detained more than 450 people, many of whom have reported being tortured.

The city of Tripoli and its northern area, home to a predominantly Muslim population, played a central role in the protests. Previously these areas had experienced a lack of media coverage, and so protests in Tripoli have also contributed to erase stereotypes related to poverty and instead highlighted the community’s artists, spokespeople, youth, and the unity of its people.

Within this context, GV author Marta Closa Valero interviewed Batool Jacob, a self-taught artist from Tripoli. Batool, who painted street-art during the protests in 2019, now continues to make art from her home as the country eases the lock-down due to COVID-19.

Marta Closa Valero: Many works made by Lebanese artists can be found on social media related to these protests, such as the cultural arts space “Art of change ” in Beirut. You have done similar work in Tripoli, how has this movement emerged?

Batool Jacob: Street art is a new technique for me, the first job I did was in January together with my friends Ghiath Al Robih, a Syrian Palestinian artist living in Tripoli, and Nagham Abboud, also a Tripoli artist. It’s interesting because its the first time in the city that a group of artists have come together for a common cause, to show the revolution and to fight for freedom of expression. Before, each area had its own art exhibitions but there wasn’t unity. 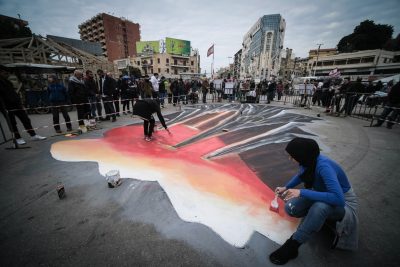 “The fall of the Lira”, by Batool Jacob, Ghiath Al Robih and Nagham Abboud. Photo by Joao Sousa, used with permission.

MCV: What was the motive for doing the first artwork together? What did you want to show?

BJ: The work was mostly Ghiath’s idea. It consisted of a 3D painting on the ground in the square of the Tripoli revolution. We represented the Lebanese pound falling into the abyss. It is a simple way of portraying what we were living through in real time, we were losing the value of state currency without the government doing anything to save the situation.

MCV: Individually and with the group, what are the main themes that you want to transmit through your work?

BJ: Our main topic is the revolution, to show how people are oppressed and the harsh conditions that we live in, the Lebanese government does not provide us with basic rights. For this reason, as artists we are looking to do something that cannot be underestimated, that is, we want to put on record the demands of the protests and ensure that our voices are heard. We don’t want to lose our right to express ourselves, we have a responsibility to do everything that we can to express our message. 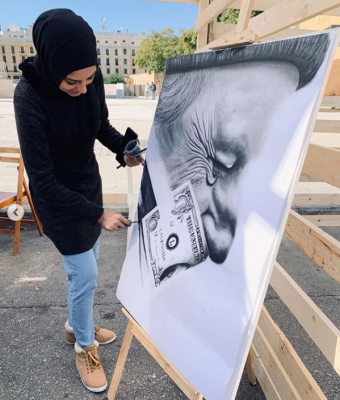 MCV: Considering that the street is a masculinized space, have you ever felt that it is more difficult to make street art as a woman?

BJ: Being a woman and wanting to make street art or any other artistic discipline that involves performing on the street is more difficult for a woman. In Lebanese society there are different mentalities, and oppression towards women does exist. Society thinks of women as being confined to the home, cooking and taking care of children. In this way our outlook diminishes considerably. It is this mentality that does not accept a woman on the street painting or performing other forms of art, such as dance. As a woman you are allowed to make art at home and then take it to a gallery, since it does not carry negative consequences because there is no public display. However, when it translates into street art, there is a public exhibition and then you can find yourself in negative situations, with lewd eyes, intimidation and people with a bad opinion of you. This leads many women to not make the leap to street art. Despite these aspects, I would like to give courage to all Lebanese women to take to the streets and carry their skills with them. 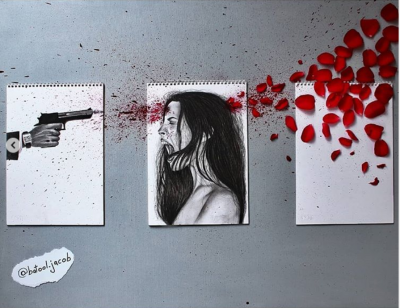 MCV: These last weeks have seen protests in Tripoli again. What was the motive for the protests and what is your position as an artist and activist?

BJ: The latest protests have emerged as a result of the rapid increase in the cost of living, the prices of basic products have increased a lot. People no longer have anything to lose, so they are projecting their anger towards the banks, since they are at the top of the institutions that rob the citizens. Personally, I do not think that this reaction is favorable to recover our money. I do believe in the union of the entire Lebanese population to put pressure on the government and to stifle this chaos. 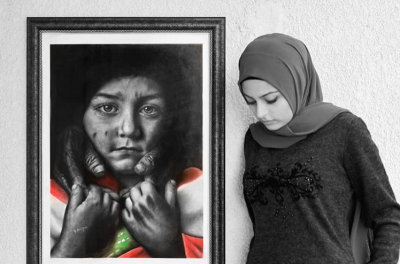 MCV: Seeing the current situation in Lebanon, what is your position with regards to the future?

BJ: The current situation does not make me feel good for the future. I want to have hope but reality shows us that the situation is getting worse. The surge of COVID-19 cases and the lack of preventative measures on the part of the people can make the situation even worse. Despite this, I wish Lebanon freedom and stability, with my art I will continue to do as much as I can to help raise awareness and transmit the messages of our protests.

One thought on “Protest art in the streets of Tripoli: An interview with Lebanese artist Batool Jacob”