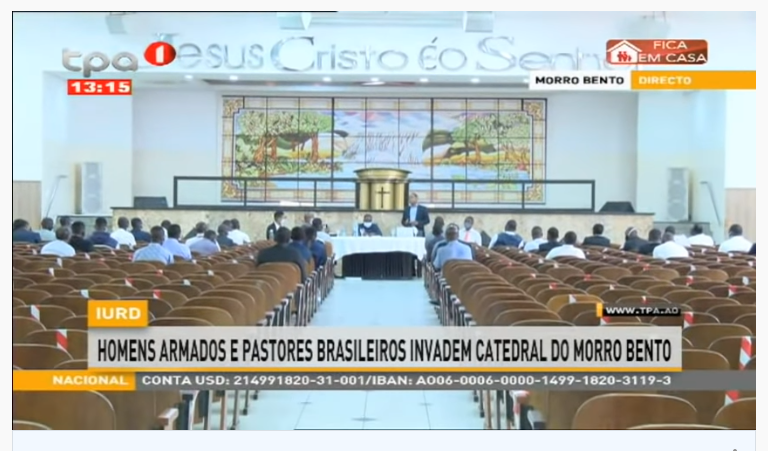 The Universal Church of Angola wants to separate from its Brazilian counterpart [YouTube TPA Screenshot] – 27 June 2020, taken by Dércio Tsandzana

The matter started in November 2019, when a group of Angolan pastors spoke out against the manner through which the Universal Church of the Kingdom of God (UCKG), one of the largest evangelical congregations in the world, managed its Angolan branch.

At that time, Angolan pastors signed a manifesto accusing their Brazilian counterparts of corruption, racism, and denouncing their enforced vasectomy policy.

In June 2020, a group of Angolan pastors formally broke ties with the Brazilian Universal Church, forming the Universal Church of Angola. The group claims to have assumed control of 42 percent of the country’s temples.

BBC Brazil reported that the Angolan branch of the Universal Church reacted with an official statement about the events:

Some temples in the country have been invaded by a group of ex-pastors who have broken away from the Church by disregarding moral conduct which, in some cases, is criminal and against the Christian principles demanded from a ministry of worship.

The Angolan police was called to reinforce security in churches in various cities, and the Angolan authorities launched an investigation into the events.

On the June 23, pastor Agostinho Martins da Silva, spokesperson for the Founding Committee of the Universal Church in Angola, told the Jornal de Angola newspaper:

Angolans are still witnessing acts of racial discrimination, castration, enforced abortions of the wives of Angolan pastors, and the removal of power from the general assembly of pastors.

We had a meeting with the Brazilian leadership, which promised, without success, to bring about reforms relating to racism, the erasure of autonomy such as the inclusion of Angolan pastors and their respective wives in notable senior posts in the church.

The ones from this country are excluded, and the ones from abroad will take their place on our home turf.

There have been Angolan pastors in this job for over 18 years, who are 40 years old and prevented from getting married because they refused to have a vasectomy.

The group claims that the Angolan branch of Universal will be taken over by Bishop Valente Bezerra Luiz, who is the vice president of the Church, according to the group of angry pastors.

On June 26, the dissidents stated that churches would be closed throughout the country due to a lack of security for the pastors and congregations.

In a video published on Twitter on June 28, an Angolan pastor claims that Brazilians are promoting acts that violate human rights and the Constitution of the Angolan Republic:

A young man from the Angolan universal church

Pastors from the Universal Church are expelled from Angolan temples. They were prepared to leave, many are in the street. Hoping they go back to Brazil. Charlatans pic.twitter.com/5qRJBupAM0

On July 6, Agência Pública, an investigative journalism organisation from Brazil, outlined that Edir Macedo attributes the “coup” in Angola to two Brazilian ex-bishops:

In a stream referred to as a “meditation with pastors”, and broadcast on social media on Saturday June 27, the highest leader of the Universal Church (IURD), Edir Macedo, blamed the Brazilian ex-bishops João Leite and Alfredo Paulo for the “coup” in Angola, which is estimated to have led religious Africans to rebel [against the church] and take control of 220 of the almost 300 of the institution’s temples in the country 15 days ago.

A litany of problems

Founded in Brazil in the late 1970s, the Universal arrived in Angola at the beginning of the 1990s and is today one of the largest religious congregations in the African country.

Universal owns RecordTV, a Brazilian communications network with branches in 150 countries, including Angola.

In 2013, Universal had its activities suspended in Angola during February and March after ten people died from asphyxiation after being crushed during a service at the Estádio da Cidadela football stadium, which was significantly over-capacity.

In 2019, researcher Teresa Cruz e Silva reported that the Universal Church entered Mozambique in 1992 in a context of crisis after the civil war, which contributed to the large number of people joining the church.

Read more: Beyond the official story, a book tells how Edir Macedo became powerful with the Universal Church – a bank and a political party

Similarly, other conflicts are known to be taking place in other Portuguese-speaking African countries such as in Mozambique and São Tomé e Príncipe.