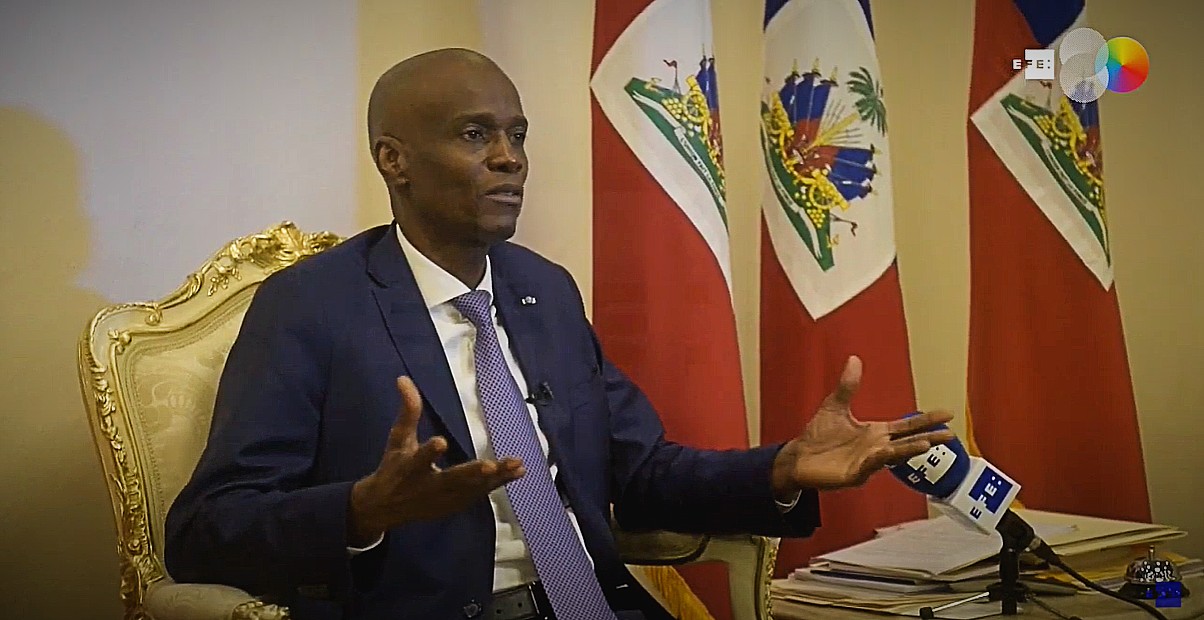 Screen capture from a video of an interview with Jovenel Moïse on the EFE news agency’s Youtube channel, dated December 7,  2019.

In Port-au-Prince, Haiti, murder rates continue to rise as armed gangs battle for power with the Haitian government.

In the first quarter of 2020, in the metropolitan area alone, approximately 243 people were murdered. During the anti-government demonstrations in September 2019, the United Nations recorded at least 42 dead and 86 wounded. This followed the massacre of November 2018, when 50 people in the impoverished La Saline district lost their lives at the hands of armed gangs.

This year, allegations of collusion between political parties and gangs struggling for political power have reached a fevered pitch.

According to the latest report from Fondasyon Je Klere (FJKL), a human rights group, the La Saline massacre was caused by gang warfare among politically affiliated armed groups fighting over control of the revenue from Croix-des-Bossales, Port-au-Prince’s main market.

The document tells of an armed conflict between the Nèg Chabon gang, said to be close to the Tèt Kale (PHTK) ruling party, and the Bout Janjan gang, which has aligned itself with Roger Milien, a former opposition parliamentarian who claims to have been aware of the planning of the La Saline massacre.

In June 2019, the United Nations Mission for Justice Support in Haiti and the Office of the High Commission for Human Rights shared a report alleging that State Representative Richard Duplan, and three police officers, were complicit in the La Saline carnage.

And soon after the massacre took place, the Center for Analysis and Research in Human Rights released a report that concluded that the political, judicial and police authorities were hushing up the La Saline massacre.

Denial of affiliation with armed gangs

President Moïse has declined on multiple occasions to respond directly to accusations of collusion between his administration and armed gangs.

The reality of gang-controlled areas has, for some time now, been characterised by an ongoing polarisation: pro-government gangs; and pro-opposition, or anti-Jovenel, gangs.

According to the National Human Rights Defence Network, other massacres similar to the one at La Saline have been carried out in the districts of Bel-Air, Cité-Soleil, Chancerelles, Tokyo, Fort Dimanche and Pont-Rouge.

Located in metropolitan Port-au-Prince, these are working-class neighbourhoods where the police barely have control and insecurity reigns. In November 2019, the RNDDH noted:

According to information received, […] these attacks, carried out by the armed gangs led respectively by Jimmy Chérizier, alias Barbecue, and Ti Sonson, also known as Ti Chèf, of the Base Krache Dife gang, are orchestrated by the executive authorities.

Chérizier, a former police officer, is now the leader of one of the criminal gangs of the G9 Gang Federation, a group that RNDDH identified in its latest report, published June 23, 2020. The document states that equipment from the Haitian National Police was used to carry out these atrocities, and the report names several police officers allegedly in cahoots with the G9.

Although the Minister of Justice has issued an arrest warrant against Chérizier for his involvement in the La Saline massacre, “Barbecue,” as he is widely known, is still free.

In June 2020, he was pegged as the architect of an alliance between the G9 and other gangs. The following month, the G9 blocked roads and thoroughfares in several districts around Port-au-Prince in an effort to pressure the government to grant them legal recognition.

As far as the Fondasyon Je Klere is concerned, the gangs of the G9 are “accredited representatives” of the government:

Haiti – Gangsterisation: The G9 is the creature of our rulers so they can control the next election, according to a report of the FJKL.
— Gazette Haiti (@GazetteHaiti)
June 24, 2020

Confidence in Moïse continues to crumble

Nearly two years after La Saline massacre, tribunal reports still seem bogged down. Local organisations, embassies and members of the diplomatic community are sounding the alarm so victims’ families can get justice. Thus far, survivors have decried a lack of leadership on the part of the government.

Confidence in President Moïse’s government has crumbled with the build-up of the anti-government protest movements in 2019. With increased corruption, authoritarianism and police violence against protesters, conditions in the capital continue to worsen.

Demands for the resignation of the Moïse government have swept the country since February 2019. Critics have denounced the president for failing to keep his promises while others have focused on corruption allegations that hang over his head.

Journalist Parker James Asmann, in an article for Insight Crime, summed up the situation:

The G9 alliance has reportedly benefited from strong ties to the government of President Jovenel Moïse. The gang leaders are seemingly free from persecution so long as they help keep the peace in the neighborhoods they control. In exchange, Moïse’s government has found in them loyal foot soldiers quelling insecurity, stamping out opposition voices and shoring up political support across the capital.

Since human rights defenders have accused the government of using gang bosses to intimidate their political opponents, it appears that the cartel looks toward both economic and electoral gains.

Meanwhile, Haiti’s legislative elections, which were constitutionally due in November 2019, have yet to be organised despite international pressure. In the interim, these armed groups are in a bid to gain leverage over the elections by creating a climate of fear aimed at deterring voters.